Note: routes automatically installed to each router pointing to the virtual access interface that was dynamically created.

Gateway of last resort is not set 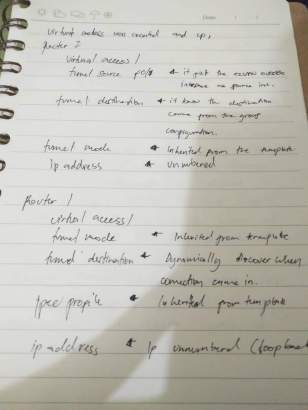 Information About IPSec Virtual Tunnel Interfaces:
The IPSec virtual tunnel interface greatly simplifies the configuration process when you need to provide
protection for remote access and provides an simpler alternative to using GRE or L2TP tunnels for
encapsulation and crypto maps with IPSec. A major benefit associated with IPSec virtual tunnel
interfaces is the reduction in overhead because the configuration does not require a static mapping of
IPSec sessions to a physical interface: The IPSec VTI allows for the flexibility of sending and receiving
both IP unicast and multicast encrypted traffic on any physical interface, such as in the case of multiple
paths (multicast routing).

Routing with IPSec Virtual Tunnel Interfaces:
You can enable routing protocols on the tunnel interface so that routing information can be propagated
over the virtual tunnel. The router can establish neighbor relationships over the virtual tunnel interface.
Multicast packets can be encrypted, and interoperability with standard-based IPSec installations is
possible through the use of IP ANY ANY proxy. The static IPSec interface, will negotiate and accept
permit IP ANY ANY proxies.
– Cisco Docs

! Difference on HUB is we are not seperating the crypto key for each spoke rather we put it in a single keyring for neighbors.
crypto keyring KEYRING
re-shared-key address 123.0.0.2 key cisco

! ANother thing is we are not creating a tunnel interface but we create virtual template with type tunnel

What is IPsec?
– IPsec is a standards based security framework.
– Lots of RFC…

Why use IPsec VPNs?
– Does not need static SP provisioning like MPLS
– Independent of SP access method
– IPv4/IPv6 transport is the only requirement
– Allows both site-to-site and remote access
– Always on vs. dial-on-demand (Cisco Anyconnect)
– Offers data protection
– Main motivation.
Note: The requirement is just IP Transport.

When we our talking about other VPN technologies like MPLS, MPLS doesn’t not have encryption. If someone has gained access to the transport in service provider network and they do packet capture they will be able to see our frames in clear text. The only thing MPLS doing is adding a additional header between layer 2 and the payload.

Note: Ipsec doen’t run directly over ATM or over ethernet it need IPv4/IPv6 transport in order to do the negotiation and actual data plane transport.

3. Used to create P2P tunnels between endpoints
– GETVPN is an exception, which can use P2MP

How IPsec Tunnels Work
1. Tunnels are dynamically negotiated through IKE
– Main goal is to NOT define crypto keys manually

2. IPsec use two data structures to build a tunnel
– Security Association (SA)
– An agreement of IPsec Parameters
– Maintancs encryption & authentication key on
peers.
– A logical structure that we maintain on the
control plane

3. Protocols that are used to form security association
– ISAKMP/IKE are the negotiation protocols used to
form SAs
– Internet Security Association and Key
Management Protool (ISAKMP)
– ISAKMP is the framework
– Says that authentication and keying should
occur

Note: This is a negotiation of parameters when router say to the another router about what encryption or authentication will be used after they agree on the parameters they gonna form an encrypted tunnel that they can do further negotiation inside of it.

Note: Goal is to build a temporary secure tunnel that we can do further negotiation inside of it.

PSK is easy, but PKI is scalable
– PSKs are difficult to maintain and change.
– PKI allows easy revocation and also hierarchy

IKE Diffie-hellman Group
– DH is the method to exchange crypto keys
– I.e. Alice and bob agree on a prime number.
– DH group number determines stregth of keys
– Higher group is better, but at expense of CPU
– Result of DH is what 3DES, AES, etc. uses as their symmetric keys.

Encryption algorithm used to protect the traffic -DES, 3DES, AES-128, AES-256, etc.
– Higher is better but at the expense of the CPU
– Some can be hardware accelerated
– I.e. AES crypto offload card

Hashing
– One way hash used to authenticate the packet
– If hashes match, the packet was not modified in
transit
– Higher is better, but again at the expense of CPU
– Hashes supported depends on IKE version
– IKEv1 MD5 & SHA-1
– IKEv2 SHA-256, SHA-384, etc.

The combination of these four parameters is called ISAKMP Policies.
– Combinations of IKE params are ISAKMP
– IKE initiator sends all its policies through a
proposal
– IKE responder checks received policies against its
own.
– First match is used, based on lowest local priority
value.
– Else, connection is rejected.

After Phase 1 completes, an encrypted tunnel exists between the peers. Phase 2 negotiation can now be hidden from devices in transit.

Security Association (SA) lifetimes
– How often should we re-key

Q&A
1. Is there any SSL VPN for S-t-S VPN?
– Open ssl in linux (doing the encryption at application level)
2. Proxy acl should match
3.
——————————————————
IKE Phase 1 is ISAKMP (Internet Security Association and Key Management Protocol) – it is used to create a private tunnel between the peers (the routers) for a secure communication.

IKE Phase 2 is also known as IPsec – it creates the IPsec tunnel used for user traffic.

IKE Phase 1 is ISAKMP (Internet Security Association and Key Management Protocol) – it is used to create a private tunnel between the peers (the routers) for a secure communication.

IKE Phase 2 is also known as IPsec – it creates the IPsec tunnel used for user traffic.

Question and Answer:
1. When do we use main mode and aggrassive mode ? In which scenarios we choose them ?
A: Aggressive mode is typically used for remote access VPN’s (remote users). Also you would use aggressive mode if one or both peers have dynamic external IP addresses.
While Main mode is used fro Site-Site VPNs.

3. Which mode will be secured one ? Main mode or Aggressive?
A: Main mode is secure as it negotiates the SA parameters first before authenticating which aggressive mode does not do.